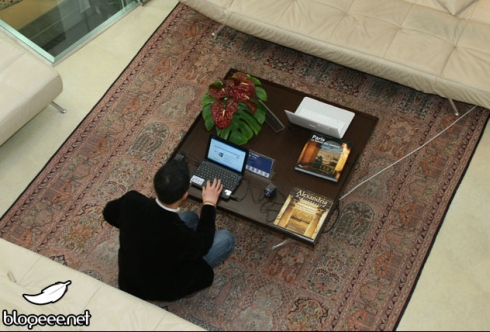 Computer maker MSI has been pumping out netbooks, nettops, and all-in-one desktop computers powered by Intel Atom chips like there’s no tomorrow. Yesterday the company took a break from showing these computers off at trade shows and infiltrated a Parisian loft. French site Blogee got a chance to check out the press event, and reports that each room was decked out with a variety of MSI products designed to make life in the apartment a bit more digital.

The living room was populated with a Wind series netbook and one of the company’s new X-340 light weight 13.3 inch laptops. Another room had the new all-in-one AP1900 desktop with an 18.5 inch display. This model doesn’t have a touchscreen, but the AE1900 which was also on display has a widescreen touchscreen display. The hardware hasn’t been finalized, so Pierre from Blogee only got to play with a prototype, but I hope MSI doesn’t mess with the aesthetics, because these all-in-one PCs are kind of awesome looking the way they are.

MSI also had a few pre-production all-in-one computers with larger 20 and 22 inch displays. These models will also have higher powered graphics processors than the AE1900, but right now it doesn’t look like the prototypes turn on.