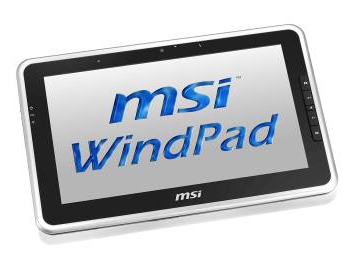 MSI has announced that it will showcase two new Android tablets at CES next week. Both have 10.1 inch displays, but while one has an ARM-based CPU and runs Google Android, the other is a Windows tablet with an x86 processor.

The Android model is called the MSI WindPad 100A and it will feature a 10.1 inch multitouch display, a digital compass, GPS, G-Sensor, and ALS light sensor. It will ship standard with WiFi, but a 3G option will also be available. MSI says the WindPad 100A can run for 8 to 10 hours on a charge, and measures just 0.55 inches at its thinnest point while weighing under 1.8 pounds.

The MSI WindPad 100W will ship with Windows 7 Home Premium. This model has a 32GB solid state disk, a G-Sensor, light sensor, and WiFi. It will run MSI’s Wind Touch software, which is designed to make launching applications on a touchscreen tablet a bit easier — although this sort of Windows tablet overlay can be hit or miss.

MSI’s press release doesn’t mention detailed specs for the different WindPad models, but the folks at Netbook News got to check out the Windows version at an event in Taiwan. They say the computer uses an Intel Atom Z530 processor and has HDMI output, a SIM card slot, 2 USB ports, and a 4-in-1 card reader. Netbook News says MSI plans to release an updated model with an Intel Atom Oak Trail processor in March. An Android tablet with an NVIDIA Tegra 2 processor and Android Honeycomb is due out in April or May.

You can check out a hands-on video from Netbook News after the break.

One reply on “MSI outlines plans for Windows, Android tablets”