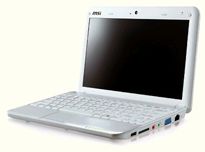 Asus may expect to ship 5 million netbooks by the end of the year, but it’s not the only company benefiting from the netbook boom. MSI, makers of the Wind U90 and Wind U100 laptop expect to ship between 600,000 and 700,000 in 2008. That’s not bad for a company most people didn’t even know made laptops a year ago. And keep in mind, Asus released its first netbook in October 2007, while MSI entered the market just this summer.