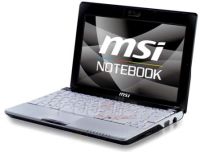 The MSI Wind U100 is already one of the most popular netbooks among mini-laptop enthusiasts thanks to its excellent design and easy hackability. We’ve already gotten a sneak peek at the MSI Wind U110, U115, and U120 models which are set to hit the US in early 2009. But now MSI sales director Andy Tung is spilling some more details about the company’s upcoming products. Tung tells Laptop Magazine that MSI will show off all three new netbooks at CES in January, with the MSI Wind U120 set to go on sale in the US before the end of January.

The MSI Wind U120 is probably the least interesting of the three new machines, since it’s basically the same as the existing MSI Wind U100 in most respects. It has a 1.6GHz Intel Atom N270 CPU, a 10.2 inch 1024 x 600 pixel display and a 120GB hard drive. What makes it a little different from the U100 is a redesigned chassis, and the inclusion of an optional 3G broadband modem. MSI also eventually plans to offer the Wind U120 with a solid state disk option.

The MSI Wind U110 and U115 are a bit more interesting, as they use the Intel Atom Z530 chip which uses less energy than the N270 processor used in many netbooks today. Tung says the U115, as anticipated, will use a combination solid state disk and hard drive. And he says that thanks to the low power processor and low power SSD, the U115 could get 10 hours of battery life out of a 6 cell battery, while the U110 which comes with a 160GB or 250GB hard drive will get about 8 hours.

If I’d read those numbers a few months ago I probably wouldn’t have believed them. But we’ve already seen that the Samsung NC10 can run for more than 6 hours on a single charge. And it uses the more power hungry Intel Atom N270 CPU. If the Z530 truly can offer comparable performance at lower wattage, it’s not impossible that these netbooks could run for 8-10 hours on a charge.

No words on the pricing yet, but Tung says the new models will cost less than $699, and if history teaches us anything it’s that while the price may start out relatively high there’ s a good chance that we’ll see several price drops after the products are release. Although Tung says the company expects to keep the price of the MSI Wind U100 stable at around $399, it’s kind of hard not to cut prices when all of your competitors are doing so.

The other interesting tidbit from the Laptop Magazine interview is that MSI does not plan to phase out the Wind U100 yet. Rather, the company will continue to sell it in parallel with the new models. MSI also plans to show a new U300 13.3″ laptop at CES. While it won’t be a netbook, MSI is adding the U to its name to highlight its suitability as an ultraportable computer.

3 replies on “MSI: New netbook models coming to the US in January”