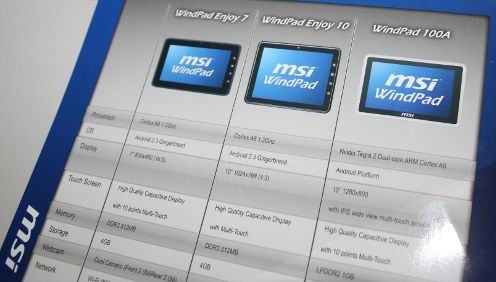 MSI isn’t putting all of its tablet eggs into the 10 inch basket. The company is also introducing a new 7 inch Android tablet called the WindPad 7.

The tablet has the usual array of sensors including an accelerometer, ambient light sensor and digital compass, as well as a 2MP camera HDMI USB, and microSD card ports.

The MSI WindPad 7 weighs less than 0.9 pounds. There’s no word on the launch date or price for this tablet. In fact MSI didn’t even mention the WindPad 7 in its press release about tablets it would show off at Computex this week. But the folks at Notebook Italia spotted a tablet comparison sheet which lists the 7 inch model.