The MSI Cubi N ADL is a compact desktop computer that measures 4.9″ x 4.9″ x 2.1″ and supports up to 16GB of memory and two storage devices. 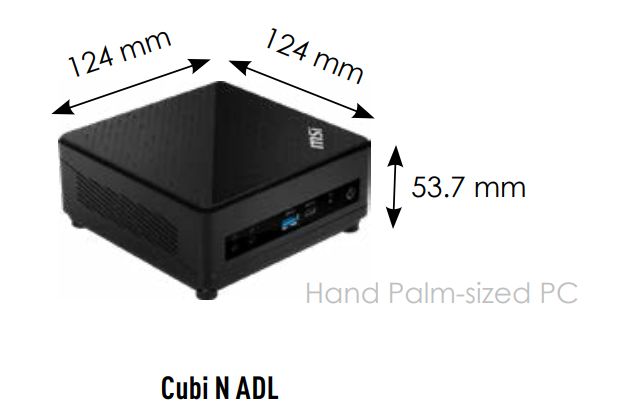 Those are Intel’s new low-cost, low-power processors which will replace the Jasper Lake processors that MSI had used for the previous-gen Cubi N JSL that launched in 2021.

The new chips should bring significant gains in both CPU and graphics performance while still consuming little power. MSI says the Cubi N ADL will be available with a choice of Intel Processor N200 or N100 chips.

Both are 6-watts, 4-core, 4-thread chips with Intel Gracemont CPU cores and Intel UHD graphics. But the N200 is a bit faster, with support for CPU speeds up to 3.7 GHz and 32 GPU execution units. The N100 tops out at 3.4 GHz and has just 24 execution units.

Other features include a single SODIMM slot for DDR4-3200 memory, an M.2 slot for solid state storage, a 2.5 inch bay for a hard drive or SSD, and a 65W power adapter. Ports include:

The system also supports WiFi and Bluetooth and comes with either an Intel Wireless AC 3168 or 9462 wireless card.

MSI hasn’t announced pricing or availability details yet, but I spotted details about the upcoming mini PC in a brochure posed to the company’s website around the time that Intel introduced its new processors.