MSI is showing off the latest member of its Cubi line of tiny desktop computers. The MSI Cubi 3 is a small desktop computer with an aluminum case and a fanless design for silent operation.

While it’s not the first MSI Cubi computer to feature passive cooling, it is the first fanless model to feature a 15 watt Intel Kaby Lake-U series processor rather than a lower-power Braswell chip.

According to Tek.No, which spotted the MSI Cubi 3 at Computex, the new computer is expected to ship this fall. 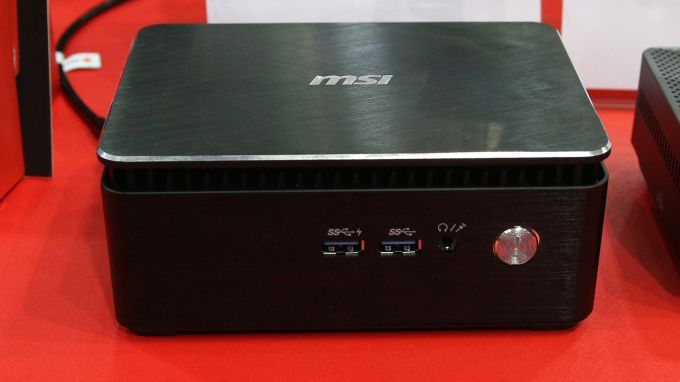 The system has ventilation around the top of the computer to let hot air escape. Under the hood, it features two DDR4 SODIMM slots for up to 32GB of memory, a 2.5 inch drive bay, and an M.2 2280 slot for solid state storage. MSI notes that the computer is also compatible with Intel Optane memory.

It’s a little larger than some MSI Cubi systems, in order to give the hardware room to breathe. But it’s still pretty compact for a desktop computer.

The MSI Cubi 3 features DisplayPort and HDMI ports, six USB ports, two Ethernet jacks, and two COM ports (including one which is used for an Ethernet jack in the display model).

Powered by a Kaby Lake-U chip with Intel HD graphics, MSI says the Cubi 3 should have no problem handling 4K displays. But keep in mind that the computer will ship with a laptop-class processor, so don’t expect bleeding edge desktop-class performance.

Still, as someone who’s been using laptops with Intel Ivy Bridge and Kaby Lake processors as my primary work machines for the past few years, I don’t really consider the use of a 15 watt processor to be a down side (although I wouldn’t mind having something a little faster for rendering large, complicated audio projects).

Pricing for the MSI Cubi 3 hasn’t been announced yet.