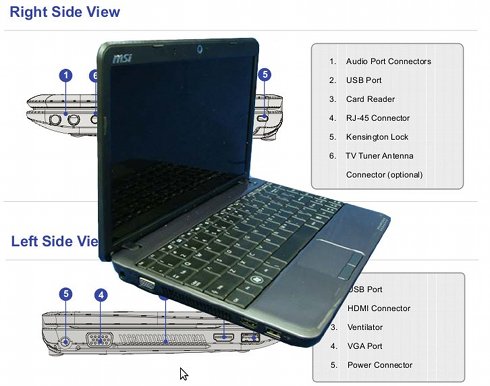 While AMD was in no rush to challenge Intel on smaller netbooks, it seems pretty clear that 11.6″ machines is where they’re drawing the line in the sand. Models like the Asus 1201T are starting to appear running the Neo processor, and now we’ve got two (possibly) from MSI set to land on U.S. soil.

As spotted by Wireless Goodness, the MS-1241 and MS-1243 have hit the FCC. One of the models could very well be the Wind U230, which was already known to be running AMD internals. The “discovery” of the MS-1241 is a bit odd, though, since that tag is already on the U210 – which has been available in the U.S. since September 1.

Details in the manual are sketchy (as they typically are in laptop/netbook product manuals). There’s mention of the AMD Yukon L335, integrated graphics, 802.11 wireless, Bluetooth, 3.5G support, 1.3MP webcam, and VGA and HDMI outputs. A TV tuner option is also available.

One thing I like about the diagrams – the bottom of the unit looks as though a single cover will provide access to all the parts DIYers typically want to swap. Hooray for less screws to lose!