Virtual Reality is all the rage these days, with 15,000 pre-orders of HTC’s new $800 headset having been placed in 10 minutes, millions of Google Cardboard headsets already shipped to date, and even McDonald’s getting in on the action.

Right now there are probably more people using smartphone apps for VR and immersive experiences than just about any other platform. Eventually PC and console games and apps could take the lead as devices like the Oculus Rift, HTC vive, and PlayStation VR hit the streets. But Mozilla sees another possibility: the web. 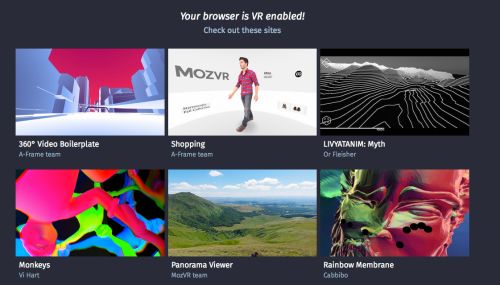 The makers of the Firefox web browser have been working with members of Google’s Chrome team to establish a WebVR standard. Now they’ve released version 1.0 of a proposed WebVR API.

Ultimately this could open the door to VR experiences that don’t require you to download and install an app on your device… but for now you do need to install a supported web browser. All of the WebVR samples available so far only work in experimental builds of Firefox or Chrome.