Mozilla has released the first version of Firefox designed to play nicely with Microsoft’s Windows 8 full-screen user interface. If you install the latest nightly build of Firefox for Windows on a computer running Windows 8, you’ll be able to fire up the new “Metro” style app from the Windows Start Screen. 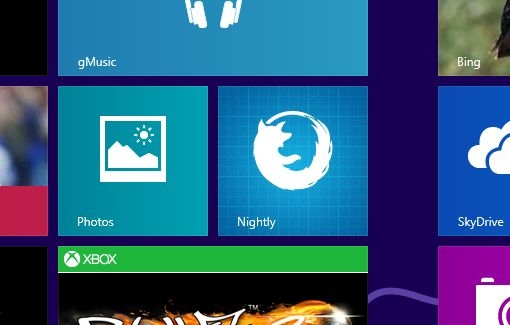 Entering Metro mode in Firefox takes a little work — you have to set Firefox as your default web browser first. You can find instructions for doing that at askvg.

Once that’s done you’ll have two ways to open Firefox. From the Start Screen choose the icon called “Nightly” to launch the full-screen, touch-friendly user interface. Or from the Windows desktop, tap the “Nightly” icon to launch the classic version of Firefox which looks much the same as it has for the past few years.

The new Metro-style app looks a lot like the Firefox mobile browser for Android. There’s a large search/address bar at the top of the screen and a plus icon to the right which you can use to open a new browser tab.

Below the location bar you’ll see a list of top sites, bookmarks, and history — and as soon as you start typing, search results will show up in this area.

You can bring up a tab menu by swiping down from the top of the screen. This mode show you a list of open tabs, as well as a toolbar at the bottom of the screen that lets you view downloads, star a page, search in a page, or bring up the same webpage in desktop view.

I took Firefox Nightly for a spin on an HP Envy X2 tablet, and while the browser is certainly touch-friendly, it felt a bit sluggish. It’s tough to say whether that’s simply because this is an early build of the browser that has a lot of room for improvement, or because the Envy X2 is a generally pretty sluggish computer.

The desktop version of the browser felt a bit more responsive — but it’s tougher to use with your fingertips.

via Engadget and Asa Dotzler