Mozilla’s Firefox web browser is available for a range of platforms including Windows, OS X, Linux, and Android. Now there’s a Firefox browser for iOS as well.

A public preview of Firefox for iOS is now rolling out in one market — New Zealand. 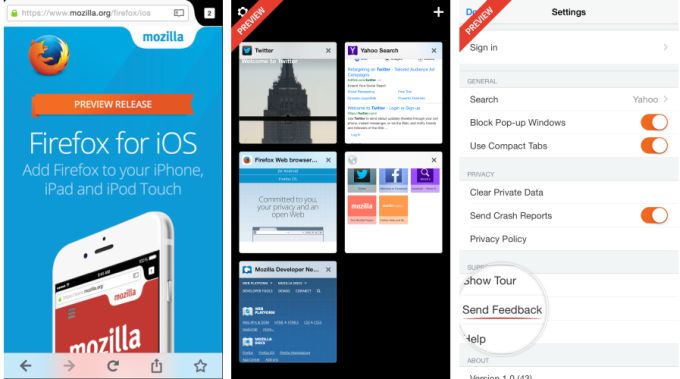 The idea is to do a limited test before offering the browser in more regions, in order to get feedback from early testers.

The iOS browser is a bit different from the others — it’s the only version of Firefox that uses WebKit as a rendering engine rather than Mozilla’s Gecko. That’s because Apple doesn’t allow browsers that use different rendering engines to be distributed through the App Store.

But Firefox for iOS does include support for Firefox accounts, allowing you to sync your history, passwords, and browser tabs between devices. Sign in with the same account you use on your desktop computer, and Firefox will automatically share that data with your iPhone or iPad.

Mozilla is soliciting feedback about a few features of the iOS web browser including Intelligent Search (which offers suggested search results) and visual tabs (which shows thumbnail icons of currently open browser tabs).

We first learned that Mozilla was working on a Firefox browser for iOS about 10 months ago, and development of the open source browser hasn’t exactly been a secret since then: You can find the source code at github. But this New Zealand pilot will be the first time the browser is publicly available (even on a limited basis) through the App Store.