Microsoft may have taken the if-you-can’t-beat-them-join-them approach to web browsing by basing its new Edge web browser on Google’s Chromium. But Mozilla continues to be lead the charge of browser independence.

Mozilla’s Firefox web browser is compliant with modern web standards, but it uses a different rendering engine and overall design than Chrome, Edge, or other browser based on Chromium and the Blink rendering engine (which is a fork of Webkit, which powers Apple’s Safari browser).

Today Mozilla released Firefox 67, and the organization says it’s up to 80 percent faster than versions of the browser from a year ago in some circumstances. And that’s just one of many changes.

You can download the latest version of Firefox at Mozilla.org. 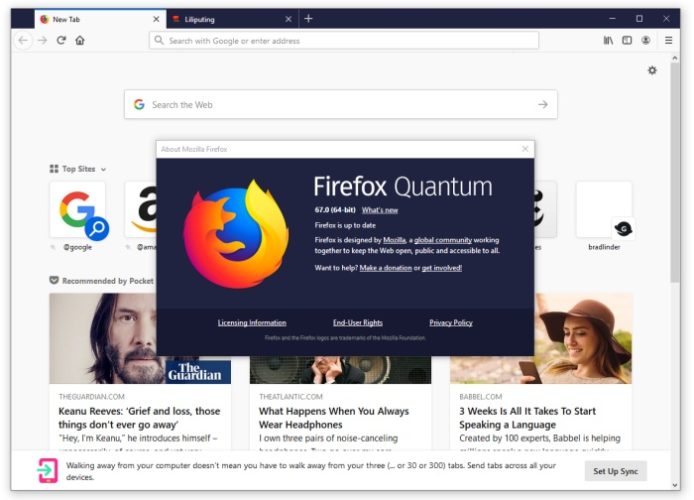 Here are some of the reasons Firefox 67 is faster than its predecessors:

Mozilla says Firefox 67 also allows you to block websites from fingerprinting you and tracking you as you surf the web, or from leveraging your computer’s CPU for cryptomining. The feature isn’t enable by default, but you can toggle it by opening the browser settings, going to privacy and security, and then choosing the types of content you want to block (which can also include trackers and cookies).

Other changes in Firefox 67 include support for the AV1 video codec for smoother video playback on sites that use that format, support for keyboard-only navigation, and some Windows 10 users may get an early look at the new WebRender GPU-based 2D rendering engine if they have computers with NVIDIA graphics cards.

There’s also support for CSS color scheme queries, which means that the browser should be able to allow websites to adapt to user’s theme preferences for light or dark modes.

You can find a full list of changes in Firefox 67 in the release notes.