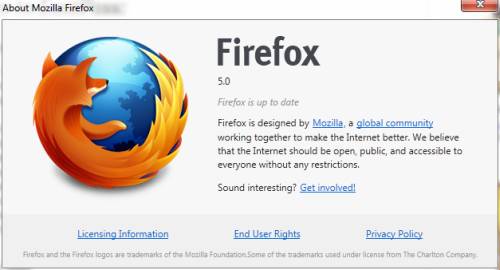 Firefox 5.0 is available for download today. You can download the latest version of the popular web browser from Mozilla’s web site or by opening your browser and checking for an update by selecting the About Firefox option from the Help menu.

Don’t expect any revolutionary changes though. While Firefox 4.0 was a huge update from version 3.x with a dramatically changed user interface, Mozilla has moved to a new rapid release schedule with new versions of the browser expected every 6 weeks. The latest build looks almost exactly like Firefox 4, but it does have a few updates under the hood including:

Mozilla has also released Firefox 5.0 for Google Android phones and tablets with support for Do Not Track privacy, improved page load speeds, and better compatibility with the SwiftKey keyboard.

We should expect to see Firefox 6 in a month and a half. You can get a sneak peek of the latest developments by downloading the latest test versions of the browser using the Aurora or Beta channels.