Now Quantum is getting ready to go mainstream. The next major version of Firefox integrates the new engine, and Mozilla says that means Firefox 57 is twice as fast as Firefox 52, which was released a year ago.

So instead of calling the new version Firefox 57, Mozilla is referring to it as Firefox Quantum. It’ll be released to the public on November 14th, but you can try an early build of Firefox Quantum by grabbing beta or developer edition builds today. 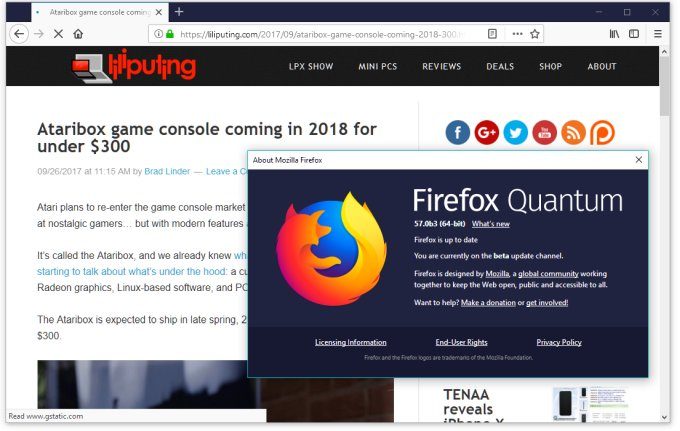 Firefox Quantum beta is also available for Android and iOS.

Among other things, here’s why Firefox Quantum is so much faster:

Firefox Quantum also has a new user interface called Photon that Mozilla says works better on high DPI displays and automatically detects whether you’re using a mouse or a touchscreen to interact with the browser, and changes menu sizes accordingly. And the new UI is designed to be more responsive: it certainly feels snappier in my brief testing so far today.

Using Mozilla’s own “Speedometer” benchmark, I found that Firefox Quantum beta scored xx, compared to xx for Firefox 55 on my laptop with an Intel Core i7-6500U processor and 8GB of RAM. The gains are said to be even better if you compare Firefox Quantum with older versions of Mozilla’s web browser.

Of course, Firefox Quantum isn’t just competing against earlier builds of Firefox. The elephant in the room is Google Chrome. So here’s a run-down of my Speedometer scores for Chrome, Firefox 55, and Firefox 57 (Quantum):

Keep in mind, benchmarks like this aren’t always indicative of real-world performance (and I didn’t really do much to prepare for the benches like rebooting my computer or closing other apps… but the conditions were the same for each test). But Speedometer is meant to simulate the experience of running multiple web apps.

Another thing to keep in mind is that Mozilla has made a big push to reduce memory consumption so that Firefox Quantum should use less RAM than earlier versions, while still loading web content more quickly.

Mozilla says more updates to Project Quantum are on the way, including a new GPU-optimized rendering pipeline, so we should expect additional enhancements soon(ish).