The Firefox web browser is available for Windows, Mac, and Linux computers as well as Android and iOS phones and tablets. For the past few years there’s also been a version of Firefox for Amazon Fire TV devices that you could use to surf the web or stream videos from sites that might not have native Fire TV apps available.

But now Mozilla says it’s ending support for Firefox on Amazon Fire TV devices at the end of the month. You’ll still be able to use the app if you’ve installed it prior to April 30, 2021, but you will no longer receive security updates and if you uninstall the app, the only way to re-install it after that date will be to sideload an outdated version.

Mozilla will also end support for Firefox for Amazon Echo Show devices at the same time. 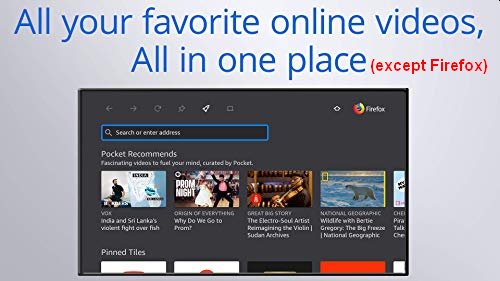 It’s unclear how many people will be affected by the move – the Firefox app for Fire TV first launched in 2017, around the time when Amazon was in a dispute with Google that meant there was no official YouTube app available for Fire TV devices, so web browsers like Amazon’s Silk and Mozilla’s Firefox provided a workaround.

Now that there is an official YouTube app for Fire TV, it’s likely that fewer people are using the web browsers.

The Firefox app does have more than 270-thousand user ratings in the Amazon Appstore, but many of them are several years old at this point.

Mozilla didn’t provide an explanation for its decision to end support for Amazon devices, but the company does note that it’s not like you’re left without options – you can still use Amazon’s Silk browser.