Most modern web browsers include some sort of private or incognito browsing mode that lets you surf the web without saving any data to your device. There are no cookies or history listings that would let anyone in your household see the websites you’ve visited after a session has ended… so you can shop for birthday presents in security. That’s what it’s for, right?

But private browsing doesn’t usually do much to keep websites from tracking you. They can still use scripts to monitor you during an incognito session for advertising or analytics purposes.

Now the makers of the Firefox web browser are starting to test a new type of private browsing that could block third-party scripts from running when you’re using a private window. 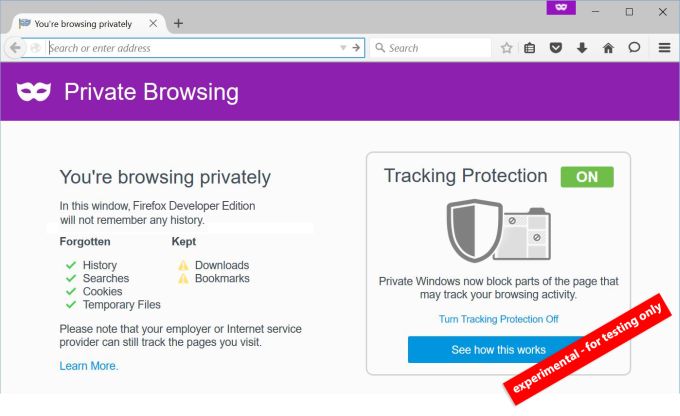 Mozilla is including the experimental version private browsing for the pre-beta “Aurora” version of Firefox for Windows, Mac, Linux, and Android.

When you open a private browsing window, not only will it not save your history, but it’ll also block web content that tracks you behavior including social widgets, analytics, and other scripts. Mozilla warns that this could make some elements of websites look broken, but you can turn off the “tracking protection” feature if you’re running into problems.

All told, it sounds like Mozilla is basically baking an ad-blocker into Firefox. It’s just that it’ll only be active when you’re using Private Browsing mode.

While private browsing can certainly come in handy when you’re surfing websites you don’t want anyone to know you’ve visited, this new feature can also keep those websites from knowing anything about you… which could be just as valuable.