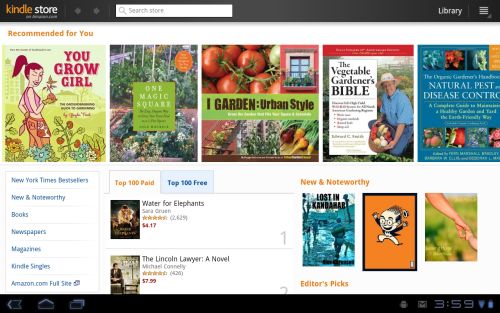 There’ve been rumors floating around for a few months suggesting that Amazon was working on its own Android tablet. The rumor mill kicked into overdrive recently when gdgt (and Engadget) co-founder Peter Rojas said he was pretty certain that the tablet was real and that Samsung was building it. Now the folks at DigiTimes are adding fuel to the fire.

The Taiwanese news source reports that OEM Quanta computers has received orders for parts from Amazon. The components could ship during the second half this year and could crank out enough parts for up to 800,000 units per month.

DigiTimes has been known to be wrong before, but the news site’s sources often do get accurate information ahead of the Western press.

And here’s the thing: an Amazon tablet makes sense. Sure, Amazon is primarily in the business of selling content produced by others rather than building its own hardware. But the company got into the hardware business with the Kindle because it wanted a low cost eBook reader on the market to encourage customers to purchase eBooks from Amazon. And that’s worked out pretty nicely for Amazon.

But eBooks aren’t the only digital goods Amazon delivers these days. The company also sells digital music, movies, and even Android apps. Right now you can purchase all of those items on a PC, and some on mobile devices. But an Amazon-branded tablet would give Amazon far more control over the user experience while providing customers with the best possible system for acquiring free and paid apps, music, movies, books, magazines, and newspapers from Amazon.

As I argued recently, Amazon doesn’t necessarily need to go it alone here. Sony, Samsung, and a number of other device makers are trying to build their own digital media stores for tablets and phones because they want in on some of that digital download action.

But Amazon’s already got a great system in place for distributing digital media and it would be awesome to see Lenovo or another PC maker launch a co-branded device with Amazon. I just don’t think they’re ready to give up on their dreams of launching their own media and app stores just yet, which means that the folks at Amazon likely decided if they want a tablet done right, they’d have to do it themselves.