Microsoft may not be having a lot of success selling its own Windows RT tablet, and other device makers may be pulling their support for the platform altogether. But that apparently hasn’t deterred Nokia. The Finnish phone maker is reportedly preparing to launch its first Windows RT tablet in September.

Lat month benchmark results for a Nokia tablet showed up online. This week they’ve been followed by leak after leak from “sources” in the know.

Now the first photos of the upcoming tablet have allegedly appeared online. 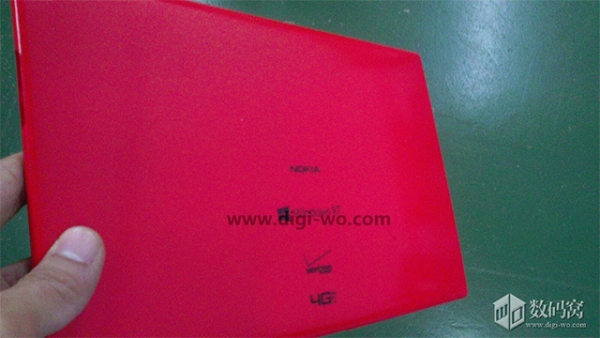 A member of the Chinese digi-wo forum has posted a few shots of the back of a tablet sporting the Nokia logo, along with Verizon’s logo and a 4G LTE marking. The back also says “Windows RT” on it, which is either a good sign that the tablet’s running Microsoft’s operating system for ARM devices or that someone really wants us to think this is a Nokia tablet running Windows RT.

While the photo doesn’t offer any detailed specs, it certainly looks about the right size for a tablet with a 10 inch display.

If earlier leaks are anything to go by, it’s likely that the tablet will be powered by a Qualcomm Snapdragon 800 quad-core processor and feature a 1920 x 1080 pixel display.

Word on the street is that Nokia will hold an event in New York on September 26th and 27th where the company could unveil the new tablet and show us more than the back cover.