Few manufacturers have pushed the modular smartphone as far as Motorola. They’ve turned out a wide variety of add-ons for the Moto Z line, like a pico projector, gamepad, and a 360º camera. Heck, Lenovo is even working on a Mod that can record your vital signs. 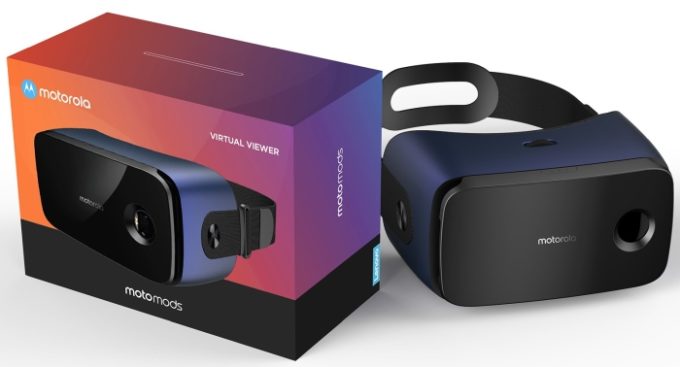 The next MotoMod could be the biggest one yet — dimensionally speaking, at least. Images posted to Twitter by Evan Blass appear to indicate that Motorola is getting ready to unveil a VR Headset for its modular phones.

Motorola calls it the “Virtual Viewer,” and it looks like pretty standard VR headset fare. There’s an eyepiece with a lens adjustment wheel on top and a holder on the front that you can clip a compatible phone into. Unlike a lot of the headsets out there right now (including Google’s Daydream View and View 2), Motorola’s has a camera cutout.

That’s a pretty strong indicator that the Virtual Viewer will let users play around with both virtual reality and augmented reality apps and games. There is also the possibility that the hole is just there to accommodate camera humps. Given the thickness of the shell that doesn’t seem likely, though. It looks like there would’ve been plenty of thickness to carve a niche for the camera into the plastic without boring all the way through.

As The Verge points out, there are still a number of fairly important details about the Mod that remain unknown. How much it will cost and when it will ship, for example. Given that what Blass posted are renders and not actual product shots, it’s even possible that that Motorola hasn’t committed to making the Virtual Viewer just yet.