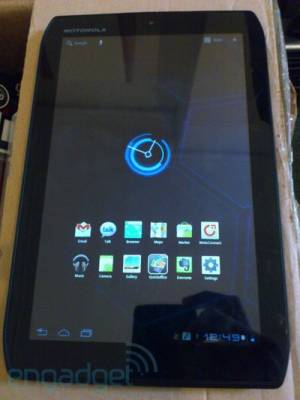 At this point it shouldn’t come as a surprise that Motorola is working on two new Android tablets. We’ve seen plenty of pictures of both, and read plenty of leaked details. But it looks like there’s a little new information today, thanks to reports coming out of Taiwan.

Apparently Motorola will build its new 10 inch tablet in-house, but Taiwanese equipment maker Compal Electronics will be responsible for a smaller model. DigiTimes describes it as a 7 inch tablet, although we’ve previously heard that it will have an 8.2 inch display. Between 250,000 and 350,000 units are expected to ship per quarter.

While we’d heard that the tablets would launch in November, it looks like one or both might not be available until December.

Motorola launched the first tablet to run Google Android 3.0 Honeycomb way back in February. That makes it kind of ancient by Android tablet standards, so it’s not surprising to see new models in the works.

While Android smartphones are now outselling the Apple iPhone, Android tablets haven’t gained as much traction in the marketplace yet, and it’s interesting to see companies taking a rather un-Apple-like approach to compete with the iPad.

While the iPad comes in one size only and Apple typically only sells one model at a time (if you want a first generation iPad, you’re going to need to buy a used or refurbished model), Motorola, Samsung, Acer, Asus, Lenovo, and other companies are taking a shotgun-style approach by offering Android tablets with multiple screen sizes, processors, and price points.

I guess the idea is that if you give people enough choices, maybe at least one of the products you offer will turn out to be a hit.

The new tablets are expected to run Google Android 3.2 Honeycomb at launch, and feature IR remote control features. The smaller model is expected to weigh less than a pound while the 10 inch model will reportedly have a 1.2 GHz dual core processor and 1080p HD video recording capabilities.