Fifteen years after introducing the first Razr flip phone, Motorola is bringing the Razr brand back… and it looks like the new model will borrow heavily from the design of the original.

Evan Blass has posted a leaked image that allegedly shows the upcoming 2019 Moto Razr smartphone with a foldable display.

With the screen closed, the new 2019 Model looks a lot like the 2004 version. But flip open the phone and instead of a small display on top and a numeric keypad on the bottom, there’s a single flexible display panel that folds at the middle.

The result seems to be a modern touchscreen smartphone that you can fold in half and slide into your pocket.

While Motorola won’t be the first company to release a phone with a foldable OLED display, the Razr appear to use the technology to solve a different problem than the one tackled by the Samsung Galaxy Fold, Huawei Mate X, and Royole FlexPai.

That’s probably a good thing — because rumor has it that this phone could cost as much as $1,500.

Update the second: Blass has shared even more images, giving us a better look at the secondary, smaller screen that displays notifications when the phone is folded. You can also see a close-up of the hinge, a glimpse of the phone’s camera, and a picture of what it looks like unfolded (big screen, big chin):

We should find out more about the new Motorola Razr smartphone in the coming weeks. Motorola has scheduled an event for November 13th, where the company is expected to officially launch the phone.

Update the third: I have no idea if this hands-on image posted to Chinese social network Weibo is legit or not, but at the very least it seems to give a pretty good idea of what the phone shown in these renderings would look like when unfolded in human hands. 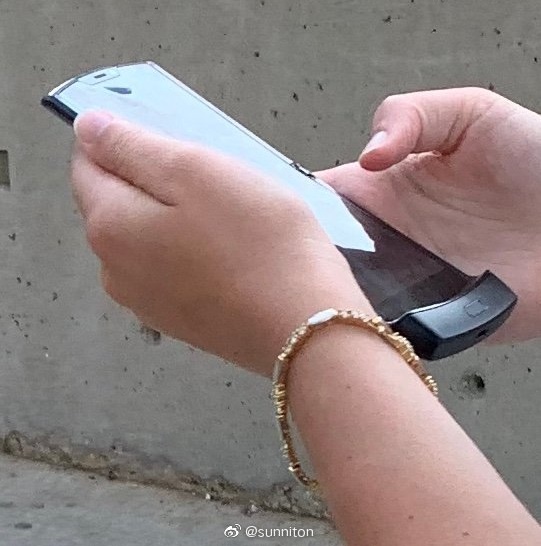 And in case you need a refresher, this is what an old-school Razr flip phone looks like: