It’s been about a year since Google acquired Motorola, which means that pretty much every Motorola phone that’s been released since the acquisition was already in the works before Google got involved. Research, development, and production take time.

But that could change this year, and there’ve rumors of an upcoming Google-influenced Motorola device called the X Fon. While allegedly leaked photos have popped up a few times, Motorola has yet to confirm the phone’s existence.

Clearly the company is working on something, though. An unannounced handset called the Motorola XT1058 just passed through the FCC, and the label drawing looks a lot like the back of the phone in some of those leaked pictures. 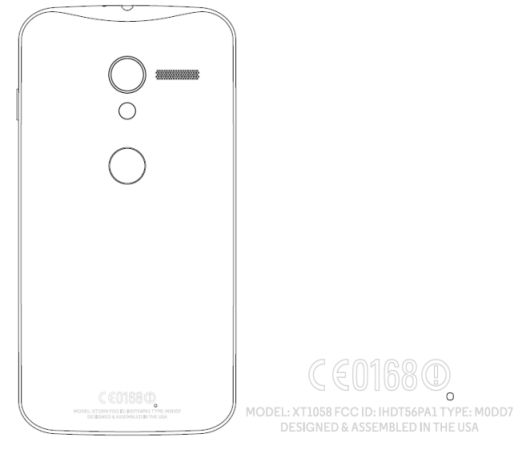 The FCC documents don’t tell us much about the device. It supports 802.11ac WiFi, Bluetooth 4.0, and NFC and works with AT&T’s 4G LTE network.

If this is truly the first Google-influenced superphone from Motorola, odds are we’ll see versions for other wireless networks as well. Motorola and Verizon typically have a pretty chummy relationship, but it’s been a while since Motorola released a smartphone for the largest carrier in the US.

Update: Leaked benchmarks suggest the Motorola XT1058 has a Qualcomm Snapdragon S4 MSM8960 dual core processor, Android 4.2.2 Jelly Bean, and a 1280 x 720 pixel display. If those specs are true, then it sounds like this would have been a top-tier device in 2012, but now it’s looking more like a mid-range smartphone.

via Droid Life, PhoneScoop and TechTastic.nl