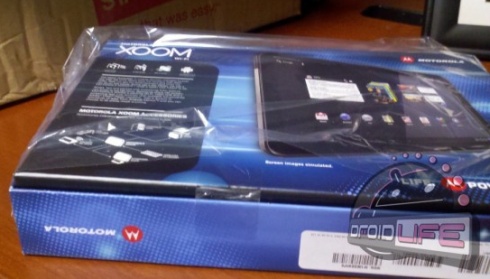 The Motorola XOOM WiFi tablet isn’t available in stores yet, but it’s expected to hit the shelves at Staples locations this weekend. One guy decided he didn’t feel like waiting until Sunday the 27th though, and he placed an order over the phone — and Droid Life reports that his tablet has already arrived.

The Motorola XOOM is the first tablet to ship with Google Android 3.0 Honeycomb. The 3G model is available from Verizon Wireless for $599 with a contract or $799 without one. The WiFi-only model has a starting price of $599.

Update: I stopped by a local Staples store, and while they didn’t have any units on sale, they did have a display model which I fiddled with for a few minutes. You can check out a brief and shaky video after the break.

Interestingly, another customer wandered up while I was playing with the XOOM WiFi and asked me how much it cost. I told her it would run about $599, and she was shocked. She had just purchased a 7 inch tablet for $139, she told me… although she didn’t know the name. She had come to Staples looking for a case for a 7 inch tablet.

5 replies on “Motorola XOOM WiFi tablet in the wild”