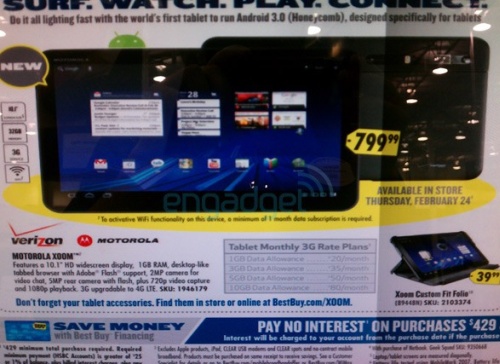 The Motorola XOOM is expected to be the first tablet to launch with Google Android 3.0 Honeycomb and the device has been getting a lot of attention since it was introduced at CES last month. But the company hasn’t shared official pricing or launch date details yet. That’s where the leak-and-rumor mill comes in, and the latest grist for the mill is a doozy: According to a leaked Best Buy ad the XOOM will be available on February 24th for a whopping $799.99.

Oh yeah, and at launch there won’t be a WiFi-only XOOM tablet, so you’ll have to pay full price for a model with a 3G modem even if you don’t want to use it with Verizon Wireless… and according to the Best Buy ad, you have to pay for at least one month of Verizon service to activate the WiFi functionality.

Now, bear in mind this ad may not be the real deal. As the folks at Reddit have pointed out, there are a couple of rather obvious typos in the ad copy. But that doesn’t mean it’s not real. How many ads, newspaper articles, books, and other professionally produced content have you read that have been littered with typos and other errors?

So is the XOOM worth $800? You know what? It actually might be. The machine has a dual core processor and higher resolution display than the iPad. It also has front and rear-facing cameras, HD video recording and playback capabilities, and Motorola promises it will be possible to upgrade the 3G capable tablet to support 4G networks.

So when you compare the XOOM on paper to the equivalent iPad (with a 3G modem and 32GB of storage), the XOOM actually comes out ahead in most respects (We’ll leave the question of whether you prefer iOS 4.x or Android 3.0 better out of it for now). And how much does that iPad cost? $729. So the rumored price for the XOOM is only about $71 higher.

Of course, Apple will likely introduce the iPad 2 within the next few months, and we don’t really know which device will have the better hardware or price at that point.

But the larger issue is that I’ve seen a lot of internet commenters proclaiming that the rumored $800 price tag is ridiculous and that the XOOM is already a failure if that’s the price — despite the fact that it’s really not much more expensive than an equivalent product from Apple which has been flying off the shelves.

I think part of the problem is that Apple surprised everybody with the introduction of the iPad by not giving it a ridiculously high price tag. Apple is known for making high quality hardware which generally costs more than the competition. While there are plenty of folks who claim that Apple computers actually aren’t more expensive than their PC counterparts when you account for all the software, support services, and other things that you get when you buy a Mac, the truth is that I can walk into a store and buy a Windows computer for about $300 today, while the cheapest Mac available runs $699… and that’s for a desktop model without a display.

So when a company like Motorola competes with Apple, everyone expects the company to do it on price. But the thing is that iPad isn’t necessarily overpriced for what you get, so it’s hard to compete on price and Motorola and other companies are actually trying to compete on features.

Still, $800 is a hard sell for a device designed to fill a niche that didn’t necessarily exist a year ago. Apple offers cheaper options with less storage or without the 3G modem. Motorola doesn’t have a cheaper option yet.

I also wouldn’t be surprised if we eventually see Verizon and other wireless carriers subsidizing the price of the XOOM to make it more palatable. The same thing has been happening with the Samsung Galaxy Tab, which is the first Android 2.2 tablet to really take on the iPad.