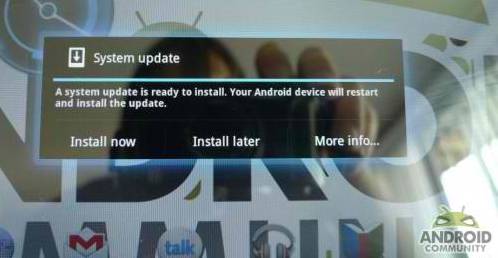 Motorola has begun rolling out a software update which brings Android 3.2 to the Motorola XOOM tablet. Right now it looks like the only folks that are able being prompted to install the update are the proud owners of XOOM WiFi tablets. If you’ve got a Verizon 3G model you may have to wait a little longer.

The news comes just a short while after Google released the source code for portions of the Android 3.2 operating system.

One of the long-awaited features that’s rolling out with the software update is support for that microSD card slot that’s been non-functional since the tablet started shipping several months ago. European XOOM owners got that update with Android 3.1 a few weeks ago though.

Another change in Android 3.2 include a new option to force apps designed for smartphones to zoom to fill the screen.

The Motorola XOOM features a 10.1 inch, 1280 x 800 pixel display, a 1 GHz NVIDIA Tegra 2 dual core processor, and 32GB of storage. It was the first tablet designed to run Android 3.0 Honeycomb, and now it looks like it’s the first tablet to get the Android 3.2 software update.

9 replies on “Motorola XOOM gets Android 3.2 update, SD card support comes along for the ride”