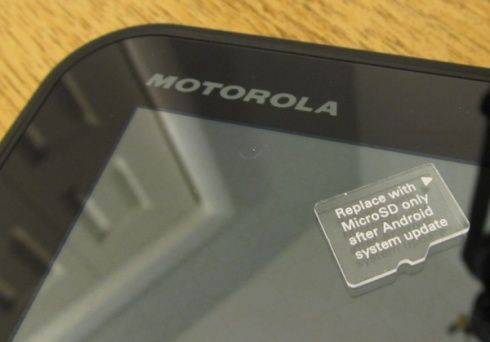 Good news everyone… outside of the US! Motorola is finally going to make that useless microSD card slot on your XOOM tablet start working. Motorala Europe has announced that it has already started rolling out a software update bringing Google Android 3.1 to XOOM users residing in countries that don’t happen to be the United States.

Among other things, the update will also activate the microSD card on the tablet, giving you extra storage space for your media and a quick and easy way to copy files to and from your tablet. The update will roll out across Europe over the next few weeks.

Motorola XOOM owners in the US already received an Android 3.1 software update recently — but no SD card fix.

If you’re not willing to wait you can apply an unofficial patch that will add SD card functionality yourself. Just don’t expect any support from Motorola or Google.

Update: Motorola has announced via Twitter that the company is working with Google to deliver a solutions for U.S. units. That’s a good thing, but unfortunately the release date remains up in the air for right now.