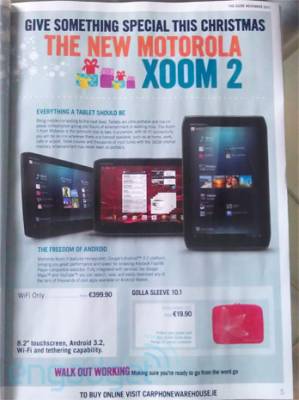 Motorola’s sequel to the XOOM tablet appears to be on track for a pre-holiday launch, and it looks like the tablet will sell for about €400 in the UK. Engadget has posted a photo of a print ad for Carphone Warehouse featuring the new tablet.

The ad doesn’t offer detailed specifications, but it does confirm that the tablet will feature an 8.2 inch display and ship with Google Android 3.2 Honeycomb and 16GB of storage. The Carphone Warehouse ad show sa WiFi-only version of the tablet.

Earlier reports had suggested the tablet will have a 1.2 GHz dual core processor, an IR remote control, and a camera that can record 1080p HD video.

Motorola was the first company to launch a tablet running Google Android 3.0 Honeycomb, but sales of the original 10 inch XOOM have tapered off a bit in recent months. Motorola only shipped about 100,000 tablets last quarter. Sure, that’s about a hundred thousand more tablets than I shipped last quarter… but I’m not a major electronics company trying to put out products to compete with the Apple iPad and dozens of Android tablets from other competitors.