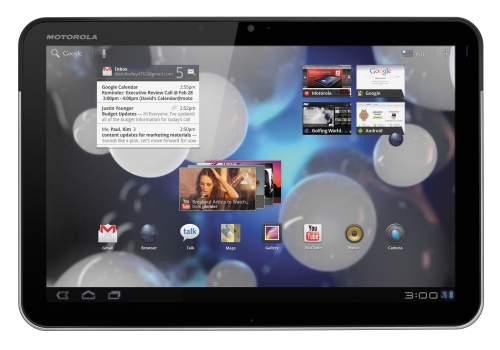 The Motorola XOOM is expected to be the first tablet to ship with Google Android 3.0 Honeycomb. The company hasn’t officially announced the pricing for the 3-capable tablet with an NVIDIA Tegra 2 dual core process, but a few leaked Best Buy listings seem to suggest it won’t be particularly cheap. Fortunately Motorola has announce there will also be a WiFi-only version which will likely be a bit less expensive than its 3G counterpart.

Motorola says WiFi and 3G versions of the XOOM tablet will launch in Europe in the second quarter of 2011. The company has also released some photos of a “Titanium” version of the tablet with a silver-colored back panel. The version we saw at CES last month had a black bad.

Motorola’s press release also mentions some of the first accessories for the XOOM, including a Bluetooth keyboard, a Speaker HD docking for streaming HD audio and video content to an external display and speakers, and a standard video dock.

There’s no information about a US launch date for the WiFi version of the tablet.