Smartphones are basically pocket-sized computers with touchscreen displays and operating systems optimized for touch. But over the years we’ve seen various projects designed to let you use them like desktop or laptop computers.

One of the newest is from Motorola – a company that tried and then gave up something similar a decade ago.

But phones have gotten a lot more powerful since then, and Motorola says its new Ready For platform will let you connect your phone to a display, keyboard, and mouse to use it like a desktop.

Not all Motorola smartphone users will get this feature though. 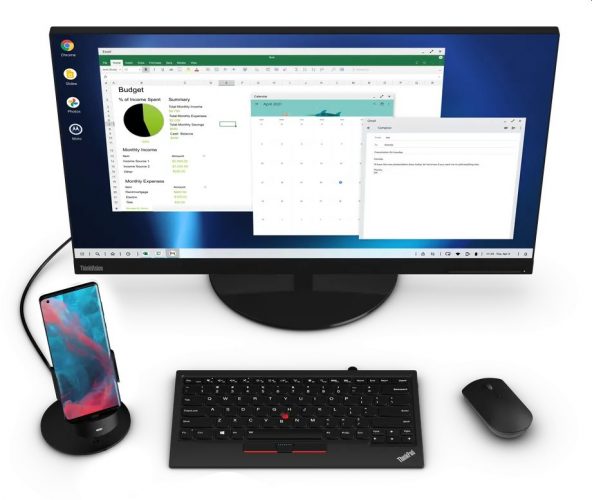 First up, the software will only be available for the Motorola Edge+ smartphone, at least at launch. And that phone is a Verizon exclusive in the United States, which means that if you’re in the US you only get to use Ready For with a single phone on a single carrier.

If you happen to have a device that meets those requirements, Verizon says you can connect your phone to a monitor, TV, or portable display with a USB-C to USB-C or USB-C to HDMI cable. Once you’ve done that, the Motorola Experience Hub should appear to give you options for big screens, including the Ready For experience which provides a desktop experience that:

You can also connect a keyboard, mouse, and/or game controller via Bluetooth or use a Motorola Ready dock for wired peripherals. The dock will be available April 19th and supports holding the phone in landscape or portrait orientations. It also has a built-in cooling fan. Pricing for the dock will be revealed closer to launch.

Motorola says Ready For is included in a software update that begins rolling out this week to Verizon customers with a Motorola Edge+ phone in the US. The update also brings Android 11 to the phone, which originally shipped with Android 10 when it first launched last year.

If Motorola’s Ready For sounds familiar, that’s likely because Samsung has been offering a similar experience with its DeX software for the past few years. But we’ve also seen multiple companies release smartphone accessories and software designed to let you use your phone as a laptop or desktop, and Motorola was actually one of the first.

The company introduced the Motorola Atrix 4G laptop with an optional laptop dock accessory at the 2011 Consumer Electronics Show. At the time Android really wasn’t designed for laptop or desktop use, so Motorola included a separate Linux-based operating system designed to support the Firefox web browser and sync with your phone.

It was a fairly short-lived experiment for Motorola, and it’s not clear that you can draw a straight line from the Atrix 4G to the Edge+ because not only has the smartphone industry changed dramatically, but Motorola Mobility has been bought and sold several times since 2011. After spending some time as a Google-owned company, it’s now a Lenovo subsidiary.