The Motorola Razr is a modern flip-phone with a foldable display on the inside and a smaller, secondary screen on the outside. Released earlier this year for $1500, the phone is now available from Motorola for $1000.

But if you’ve been holding out for a model with a speedier processor and 5G support, it looks like that’s on the way.

Earlier this year details about the upcoming Motorola Razr 5G started to leak, and this month @evleaks began posting a series  of pictures and animations giving us an idea of what to expect. The latest confirm some of the earlier rumors. 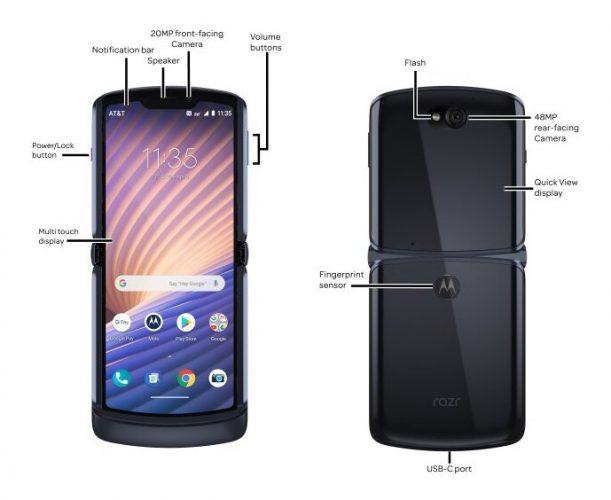 Physically, the new smartphone looks a lot like its predecessor. But some key specs including the camera, processor, and wireless capabilities have allegedly been updated. Keep in mind that the Razr 5G specs listed in the table below are rumored at this point rather than confirmed.

The new model should also support sub-6 GHz 5G network and according to @evleaks, it will be available from AT&T in the United States. It’s unclear if the phone will support Verizon’s mmWave 5G network.

There’s also no word on the price or precise release date yet, and it’s unclear if Motorola has many any changes to the displays — the model released earlier this year features a 6.2 inch foldable 2142 x 876 pixel pOLED display and a 2.7 inch, 800 x 600 pixel gOLED display on the cover of the flip phone.