Modern smartphones include a handful of features designed to make them tougher to break. Corning’s Gorilla Glass and similar technologies give many phones a tough-to-scratch screen. And a growing number of phones are waterproof, which means you can use them in the rain, splash water on them in the kitchen, or even drop them in the toilet without causing serious damage.

But it’s also tougher than ever to actually fix most modern phones when they do break.

Need a screen replacement? Most phone makers require you to send in your phone and pay a hefty price for repair. Third-party repair shops might be slightly cheaper, but also slightly riskier. And good luck finding a replacement battery if your phone can’t make it through the day anymore.

It’s against that backdrop that Motorola’s new partnership with online repair shop iFixit is so intriguing: Motorola is providing official replacement parts to iFixit, which is selling repair kits for select Motorola phones. 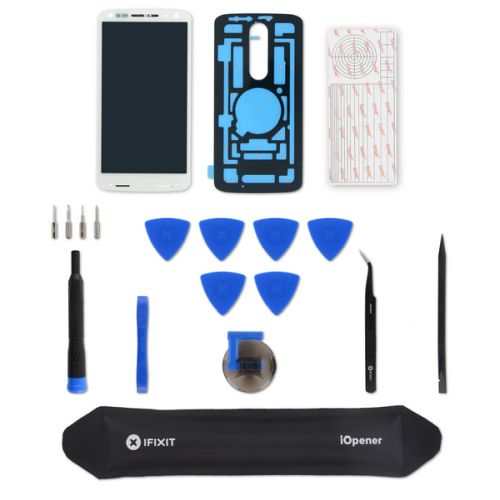 The kits range in price from $35 for a Moto X battery replacement to $200 for a Moto Z Force or Moto Droid Turbo 2 screen digitizer and assembly.

Each kit comes with the tools you need to open up a phone, step by step instructions, and replacement parts.

For now it looks like Motorola and iFixit are focusing on batteries, screens, and digitizers. Those are certainly some of the most likely components to need repair or replacement… but if something else breaks you’re still on your own.

Still, it’s interesting to note that Motorola is the first major phone maker to partners with iFixit in this way… and that the announcement comes just a few days after iFixit gave Microsoft’s Surface Laptop 2 a repairability score of 0 out of 10: laptop makers are increasingly making computers just as tough to upgrade or repair as smartphones (if not harder).