Smartphones have largely replaced point-and-shoot cameras for most folks, and with the addition of wide-angle, telephoto, and depth-sensing cameras, they can even replace a DSLR in some situations.

Now Motorola is taking aim at one category of standalone cameras that hasn’t really been challenged by smartphones yet: GoPro-style action cameras.

The Motorola One Action has three rear cameras that use a “combination of hardware and software innovation” designed for folks that want to use their smartphone to capture sports and other high-action video.

Motorola is launching the phone in Brazil, Mexico, and select European countries for 259 Euros (about $285). It’ll be available in additional markets in the coming months, with a US and Canada launch set for early October. 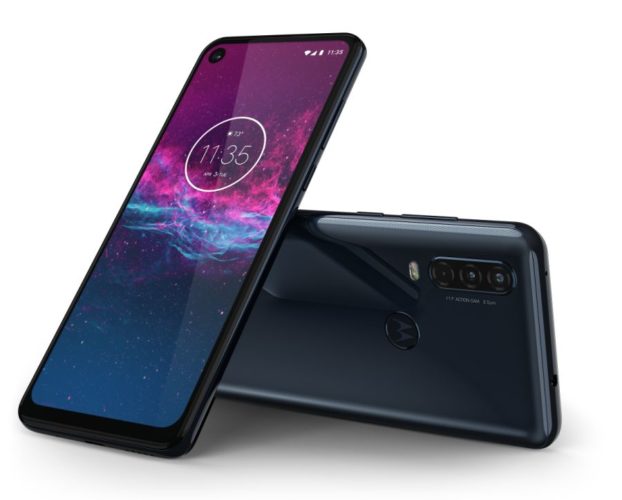 The Moto One Action features a 6.3 inch, 1080+ IPS LCD display with a 21:9 aspect ratio and a small hole for the 12MP front-facing camera in the upper left corner.

It’s powered by a Samsung Exynos 9609 processor and features 4GB of RAM and 128GB of UFS storage plus a microSD card reader for up to 512GB of  removable storage.

Other features include a 3,500 mAh battery, a 10W USB-C charger, and a headphone jack. The smartphone comes in blue or white color options.

It’s the rear cameras that are the phone’s stand-out features though:

In addition to letting you capture stabilized wide-angle video, Motorola notes that the wide-angle camera supports “quad pixel technology,” which means you can capture up to four times more light for brighter images if you’re willing to settle for lower-resolution pictures.

Another nifty trick? You can shoot landscape video while holding the phone in portrait mode.

Not-so-nifty? That’s apparently the only way to shoot in landscape using the action camera. Engaget notes that the camera is actually positioned at a 90-degree angle because apparently Motorola figured that’s how a lot of people hold their phones when shooting video these days.

While Motorola is positioning the smartphone as an action-camera replacement, it’s not exactly rugged. According to GSM Arena, the phone supports IPX2 water resistance, which means that it can withstand dripping water when tilted at a 15 degree angle and… that’s it. You’ll also probably want to put the phone in a rugged case if you plan to use it in settings where there’s a chance it’ll fall on concrete or gravel.

Still, for a sub-$300 phone, the Motorola One Action doesn’t look bad on paper. It may not be a true action camera killer, but the wide-angle camera sensor with video stabilization isn’t a feature you’re likely to find on a lot of other phones in this price range. So if that’s a high priority feature for you, I suppose it’s nice to have the option of picking up a phone that doesn’t cost $1000.

The Motorola One Action is an Android One device that will ship with Android  Pie and receive at least two years of regular software updates.