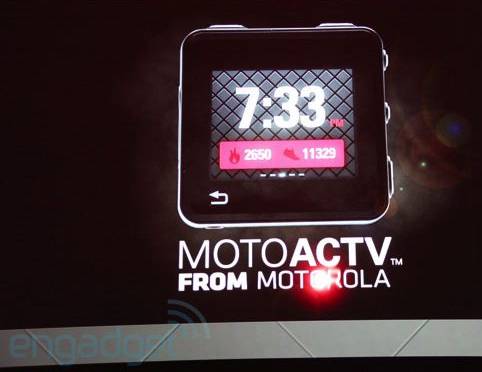 The Moto ACTV is aimed at the fitness enthusiast crowd. It function as a portable music player, but it can also track your mileage as you run or ride a bike, and estimate how many calories you’ve burned.

The little device can be used with a wristwatch-band, armband, or other attachment. It has a 600 MHz processor and GPS and is powered by Google Android. It has a capacitive touchscreen display, FM Radio, and enough storage capacity for up to 4,000 songs.

Motorola will also offer Bluetooth headsets — including one with a built-in heart rate monitor. You can also track your stats on the web at a Moto ACTV portal. Your information will be automatically uploaded over WiFi.

You can also synchronize the Moto ACTV with a Motorola smartphone so that you can see text messages and other notifications from your phone on the ACTV device.

While the Moto ACTV looks a lot like Apple’s iPod Nano, the fact that it’s designed from the ground up as a fitness device may help set it apart.