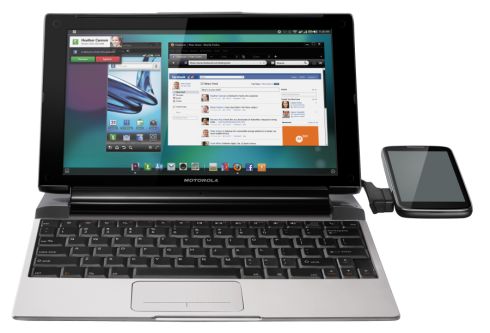 Motorola has introduced a new laptop-style docking station that lets you use your phone as if it were a notebook computer. The Lapdock 100 looks like a thin and light laptop, but it doesn’t work as a standalone device — there’s no operating system or processor to speak of.

Instead, you connect a supported Android smartphone and the phone will act as the brains of the system. But you don’t just get to run Android apps on a 10 inch display. When you connect the Lapdock you also get access to a full desktop version of the Firefox web browser as well as a file manager and other apps.

The Lapdock 100 isn’t the first laptop docking station we’ve seen from Motorola. When Motorola launched the Atrix 4G smartphone earlier this year the company introduced a similar docking station called the Webtop that featured an 11.6 inch display and a space behind the screen where you could insert the phone. 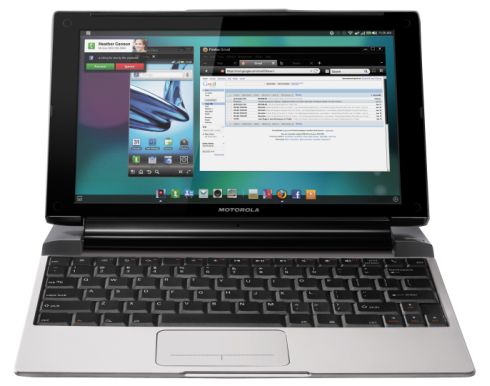 The new Lapdock has a smaller 10.1 inch display. And while there’s still a spot behind the screen for docking your phone, there’s also a cable that can be used if your phone’s docking port is in an awkward location.

The docking station includes its own battery — which should run for about 5 hours, or allow you to recharge your phone’s battery.

Right now the Lapdock 100 supports 3 different phones: The Motorola Atrix 2, Photon 4G, and Droid Bionic. It should also support future devices — although the new dock will not work with the original Atrix smartphone. Still, it’s good to see that Motorola isn’t building a separate laptop dock for every single new smartphone.

The docking station will be available for AT&T customers on October 17th, and Verizon and Sprint customers should be able to pick one up by the end of the year. Unfortunately we still don’t know how much the smartphone accessory will cost — the original Webtop sold for a whopping $499, or about $199 when you bought it with a phone and signed up for a new service plan.