Motorola made some big strides in offering smartphones that are affordable and customizable in 2013. Now CEO Dennis Woodside says the company could go even further in 2014.

In an interview with Trusted Reviews, he suggested future smartphones could be even cheaper and that customers could customize everything from colors to screen size. 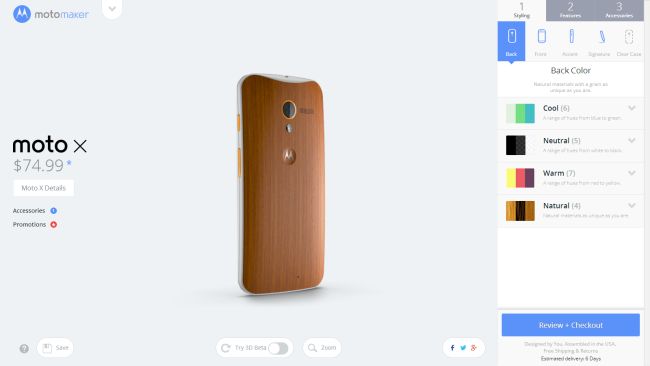 Motorola’s Moto G might be one of the best smartphones you can buy for $179 (without a carrier subsidy), but Woodside says there’s no reason we couldn’t see a $50 smartphone in the future.

He also says that right now Motorola lets customers customize the colors and materials of their phones through the Moto Maker website. Within the next year or two you might also be able to choose the screen size and “functionality” of your phone through the website.

While Woodside didn’t explain what he means by “functionality,” it could be a hint that you’ll be able to choose from different memory, storage, and possibly even processor or sensor options. After all, Motorola has already started looking into modular smartphones.

Phones with bigger screens also tend to have bigger batteries (and larger cases) than small-screened models, so hopefully you’ll be able to customize more than just the size of the display. But I know plenty of folks would like to have a phone that’s as powerful as the 4.7 inch Moto X, but which has a 4.3 inch or smaller display. Maybe one day you’ll be able to configure one for yourself.