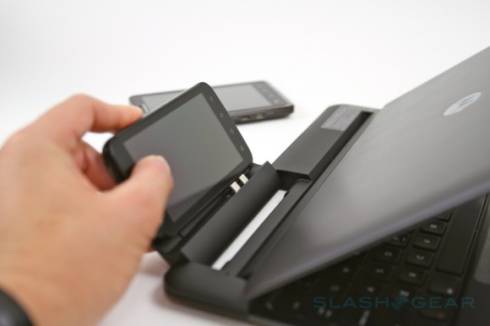 When Motorola launched the Atrix 4G smartphone this year it was the first phone from the company to work with an optional laptop docking station that allows you to use some of the phone’s functions with an 11.6 inch display and a full-sized keyboard. But Motorola said the Atrix 4G wouldn’t be the only phone with a “webtop” docking station.

It’s taken the better part of a year, but now we have the second phone with an optional webtop: The Motorola Droid Bionic. Verizon will start selling the phone tomorrow for about $300 when you sign up for a contract. The laptop dock can be yours for another $300.

Or you know, you could just spend your $600 on two netbooks, 3 iPods touch, or you know, just not spend all that money.

Motorola webtop docking stations grabbed my attention earlier this year, since they provide a way to use your phone like a laptop without having to sync data between multiple devices. The phone is the brains of the laptop. But unlike the upcoming Asus Padfone, which really just blows up a smartphone user environment to fill the screen of a 10 inch tablet, the webtop systems use an Ubuntu Linux-based operating system that offers little more than a Firefox web browser and the ability to control your phone to make calls or run apps in a small window that doesn’t fill the whole screen.

In other words, there’s really not much reason to use the webtop when you can find all sorts of other devices for $300 or less which do just as good a job of surfing the web.

For $99 or less, a webtop would be a really nice addition to a smartphone. For $300 it’s a much tougher sell. Then again, Motorola has been offering the Atrix 4G with a webtop dock for a while, and I can only imagine the company wouldn’t have bothered making one for the Droid Bionic if the Atrix model wasn’t selling.

It turns out that if you bought a webtop for the Motorola Atrix 4G and you were thinking about upgrading to a Droid Bionic, you’ll have to buy another webtop. The docking stations are not interchangeable.