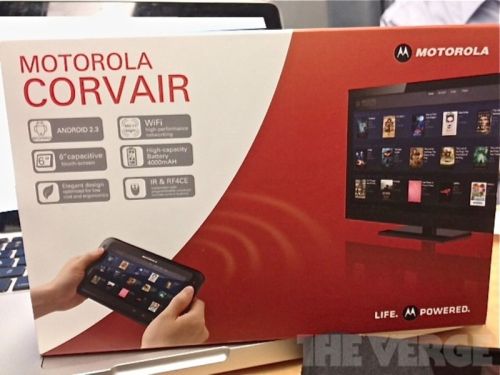 It might look like handheld tablets with touchscreen displays have exploded all over the marketplace in the year and a half since Apple released the iPad. On the other hand, it’s possible that we haven’t seen anything yet.

While a number of computer and phone makers have been cranking out Android tablets to compete with the iPad head-on in the all-purpose tablet space, there may also be a huge market for purpose-built tablets. We’re already starting to see eBook and media consumption tablets such as the Amazon Kindle Fire or Barnes & Noble NOOK Color. And touchscreen GPS units for automobiles have offered many tablet-like features for years. You could arguably throw eBook Readers with E Ink displays into this category as well.

Now Motorola may be working on a tablet that’s basically a souped up home theater controller.

The folks at The Verge received some leaked photos of a new product called the Motorola Corvair.

It’s a 6 inch tablet which runs Google Android 2.3 Gingerbread. It has an IR controller and may also be able to work as an RF remote control and the device has a large 4,000 mAh battery which means you probably won’t have to charge it that often if you use it primarily as a remote control for your TV.

But this isn’t just a device for flipping channels and adjusting volume. Instead it should be able to run Android apps including music and movie players and internet radio or video apps — and the photo on the box shows a TV and tablet displaying the same screen.

So you may be able to use the tablet as a touch-based controller for some sort of new TV or set-top-box which runs Android… or maybe it’s just a tablet that comes with the Google TV remote control app and it’s designed to work with home theater devices running Google TV.

If the Corvair does come to market, it won’t be the only special-purpose Android tablet from Motorola. While the company has been offering XOOM tablets to consumers since February, Motorola also introduced the 7 inch ET1 business tablet running Android 2.3 last month.

Note: I realize that some folks insist that all of the above items are “slates” and not tablets. But I believe the definition of tablet has changed to encompass these new forms of electronic devices over the past few years. You don’t need a keyboard or stylus to have a tablet — the original tablets were made of stone.