Up until now if you’ve wanted a smartphone with a high definition screen you’ve had to pay a premium price to get one. The iPhone 4S, HTC One X, and Samsung Galaxy S III tend to cost around $200 or more when you sign up for a 2-year contract, and much more if you buy a phone off-contract.

But the Motorola Atrix HD breaks the mold. AT&T has announced it will soon offer this smartphone with a 4.5 inch, 720 x 1280 pixel ColorBoost display for $99 on-contract. 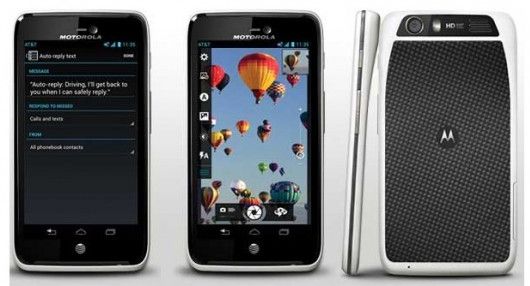 Update: It looks like the phone has the same chip found in the HTC One X and Samsung Galaxy S III, and offers similar performance (although seriously subpar battery life).

It features a 1.5 GHz dual-core CPU, 1GB of RAM, 8GB of storage, and a microSDHC card for up to 32GB of additional space.

The phone runs Google Android 4.0 Ice Cream Sandwich and features a 1.3MP front-facing camera, an 8MP rear camera and has a 1780 mAh battery. It measures 8.4mm thick and weighs 4.9 ounces.