Motorola’s next flagship phone is coming soon, and according to marketing materials shared with VentureBeat’s Evan Blass, it’ll feature a 5.5 inch, 2560 x 1440 pixel shatterproof display, a Qualcomm Snapdragon 835 processor, up to 6GB of RAM, and up to 128GB of storage. And like every other phone in the Moto Z family, it supports MotoMods for additional functionality.

It is… mostly. But the new phone has a smaller battery and you’ll notice I said “up to” for the memory and storage specs. It turns out that the US model won’t be quite as maxed out. On the bright side, while the original Moto Z Force was a Verizon exclusive in the United States, the new model is expected to be available from all four major carriers in the US. 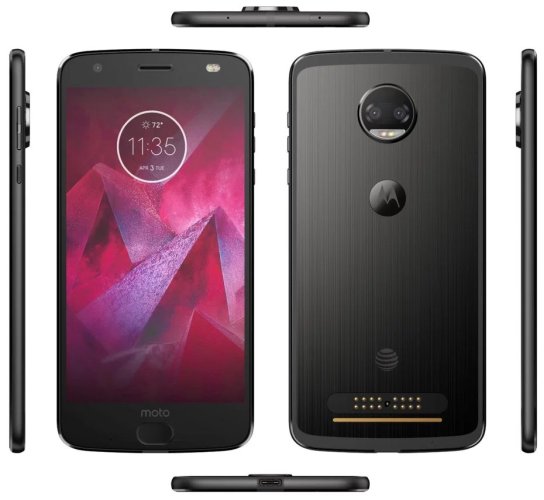 US customers will only be able to buy the Moto Z2 Force with 4GB of RAM and 64GB of storage. It’s the international versions that will have more of each.

You do still get a microSD card slot though, so you can add up to 2TB of extra storage if you need more space.

As for the smaller battery? It seems to be a sacrifice made for the sake of thinness. The new model has a 2,730 mAh battery, compared with the 3,500 mAh battery in last year’s model.

But if you want the same kind of battery life offered by the original Moto Z Force, it seems like you might want to invest in a battery pack-style MotoMod… or maybe just pick up a cheap USB power pack so you can plug in your phone on the go.

Motorola also updated its Moto Z Play lineup in June, with the launch of the Moto Z2 Play. Like the Moto Z2 Force, that phone is a faster, thinner version of its former self… with a smaller battery.

13 replies on “Moto Z2 Force specs leaked: thinner (and with a smaller battery)”