One of the key features that sets the Motorola Moto X apart from the competition is an optional always listening mode which lets you activate your phone by speaking to it — even if the display is off.

It’s part of the phone’s Touchless Controls feature — but it turns out the Moto X isn’t the only phone with the hardware to support always-on listening. Independent developer Guillaume Lesniak has figured out how to make a Google Nexus 5 smartphone behave like a Moto X. 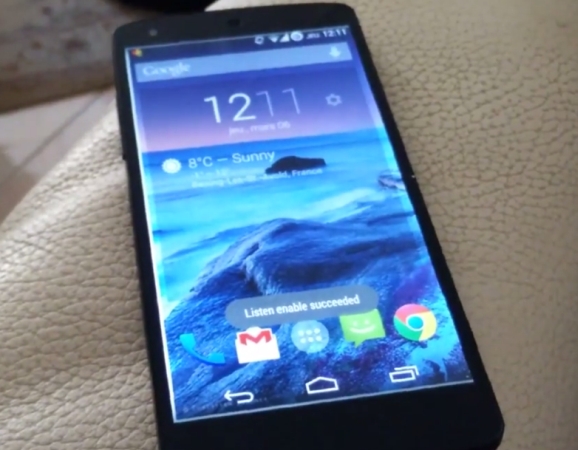 Both phones have chips from Qualcomm, but while the Moto X has a Moto X8 chipset with a Qualcomm Snapdragon S4 processor and a natural language processor, among other components, the Nexus 5 has a Snapdragon 800 chip… which also happens to have a low-power audio chip which can offer some of the same features.

This allows the phones to listen for a keyword that will wake up the CPU and turn on the display without taking a dramatic toll on your device’s battery life.

There’s just one problem: Qualcomm’s chip might have the right hardware to support always-on listening, but Motorola developed the software in partnership with Nuance. So Lesniak is unlikely to be able to release his code without incurring the wrath of lawyers for those companies.

Still, Lesniak (who also goes by the moniker xplodwild on the internet) has posted a video showing how he can wake up his own Nexus 5 using nothing but voice recognition — showing that it’s theoretically possible for someone with the right licensing agreements to bring this Moto X feature to other phones with Qualcomm’s Snapdragon 800 CPU.