Motorola is expanding its line of mid-range Moto G series smartphones with two new phones. The Moto G100 packs a Qualcomm Snapdragon 870 processor, making it the first Moto G phone with an 800 series chip. It also has a 90 Hz FHD+ display.

The phone debuted in Europe and Latin America in March, and now it’s available in the United States. With a list price of $600 (it’s on sale for $500 during a launch promotion), it’s the most expensive Moto G series device to date. But the company is also offering a lower-cost Moto G50 in select markets (not including North America). starts at €230 and which still has a 90Hz display and 5,000 mAh battery. 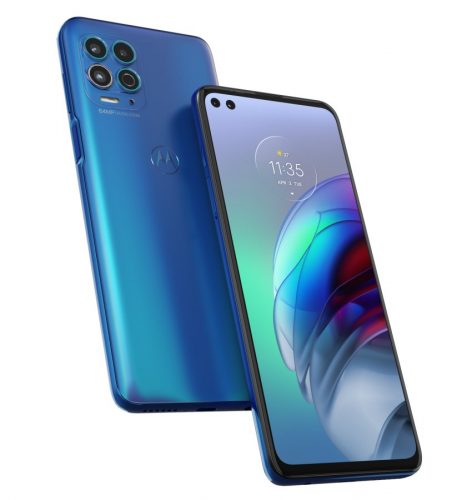 The Moto G100 has the kind of specs that would have seemed premium a few years ago, including support for fast charging, a triple camera system, and that Snapdragon 870 processor.

One nice thing about mid-range phones, though, is that they tend to have a few features you don’t find on premium models as often. In this case, that means there’s a headphone jack and a microSD card reader capable of handling cards up to 1TB.

If you’re in an area where the Moto G50 is available, that model sells for about 230 Euros and up and also has a 90 Hz display, but it’s a lower resolution screen and the phone has a slower processor, slower charging, a less impressive camera system, and a few other compromises. But it’s still nice to see features like high refresh rates trickling down to truly mid-range or budget phones.

One more thing that sets the Moto G100 apart is that it supports Motorola’s new “Ready For” platform which lets you connect the phone to an external display to watch videos, play games, or use your Android apps in a desktop-like view. It’s a feature that Motorola first introduced in the United States last week for the Motorola Edge+ smartphone on Verizon, but now it’s making its way to an additional device and additional markets… but not to lower-cost phones like the Moto G50 apparently.