Rolocule’s Motion Tennis is a game you play on your TV while using your phone as a motion-sensitive remote control. The company launched an Apple TV and iPhone app a while ago and began showing off an Android demo last summer.

Now Motion Tennis for Android is ready to go. You can download it for free from the Google Play Store and use your phone as a Wiimote for a very basic game of tennis that shows up on your TV. 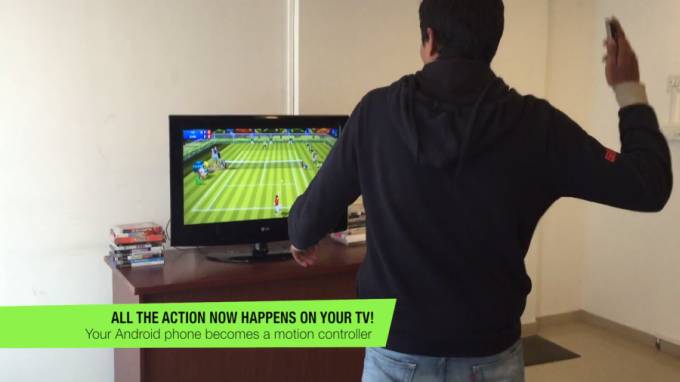 In order to play you’ll need a Chromecast, Miracast, Apple TV, or another supported device that supports screen mirroring including a Sony or LG Smart TV.

Once everything is set up, you can fire up the game on your phone, beam it to your TV and then swing your phone like a tennis racket to hit the on-screen ball.

Just don’t expect a lot of accuracy: as long as you swing sometime around the time when the ball might be approaching, you’ll probably hit it. The screen flickered several times during my first match. And the navigation menus can be a bit confusing.

Rolocule also makes you wait between games. Once I finished my first match, I got a message letting me know I’d have to wait 30 minutes before I could play again… unless I wanted to buy some “tickets.” You can get tickets for 10 games for 99 centers, 50 games for $4.99, or 125 games for $9.99.

But honestly, the game’s not quite responsive enough to really be fun. It feels more like an intriguing tech demo than an actual game.

The concept is promising though… and Rolocule isn’t done developing Motion Tennis for Android devices. TechCrunch reports that an Android Wear app is in the works. It would allow you to play by swinging your arm even when you’re not holding a phone.