Pretty much every major US wireless carrier now offers a few tablets with 3G or 4G data capabilities. But while there’s plenty of supply, there doesn’t appear to be nearly as much demand. 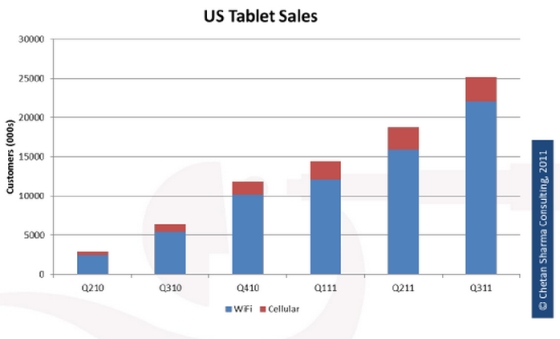 According to a report from analyst Chetan Sharma, 90 percent of tablet users are only using WiFi. Some of those customers actually purchased models with cellular capabilities, but don’t use the mobile broadband features.

He predicts that mobile operators that offer plans that bundle data plans for multiple devices such as smartphones and tablets could see better adoption of 3G and 4G tablets.

But for now, he doesn’t think wireless carriers are a particularly important distribution channel for tablets — no matter how many carriers advertise that they have the latest iPad or Android tablet. You can buy those devices just as easily from Apple, Amazon, or any number of retail stores.

I can’t help but agree with Sharma’s conclusions about bundled pricing. It seems silly to spend an extra $30 per month so that you can use cellular data on your phone and tablet. In fact, most carriers charge you extra just to tether your phone to your tablet so you can surf the web on a larger screen — even if you don’t get any extra data allowance when you pay for tethering.

Give me a 5GB to use on either device and only charge me extra if I go over, and I might think about buying a 3G or 4G tablet.

Or, as GigaOm’s Kevin Tofel suggests, just follow the Apple route and let me buy a tablet with cellular capabilities, but don’t require me to sign up for a two-year contract to use that feature. If I want data one month of the year when I’m on vacation, let me pay for just one month.

What do you think? Do you have a tablet, and did you opt for a WiFi-only model or one with cellular capabilities?