Smartphone accessory maker Moshi has released a new device that lets you charge your phone while simultaneously listening to music with wired headphones or speakers.

That’s a problem that didn’t exist until recently, but thanks to the growing trend of smartphone makers shipping phones that lack 3.5mm headphone jacks, the $40 Moshi USB-C Digital Audio Adapter with Charging is probably going to be a must-have annoyance for some folks. 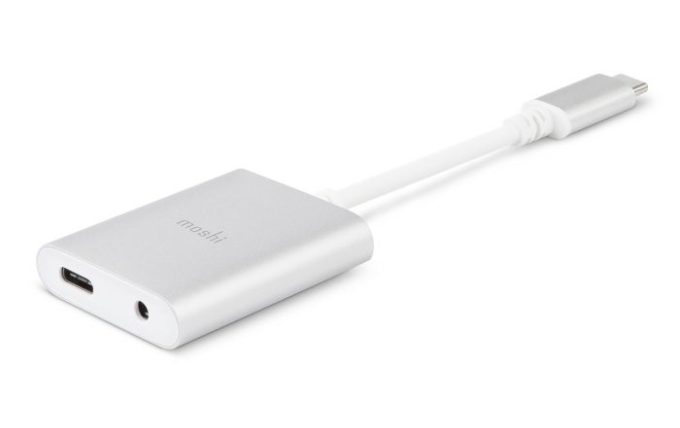 I’ve been using a Google Pixel 2 without a headphone jack as my primary phone for the past year and for the most part it hasn’t been too problematic. I already use Bluetooth headphones and speakers for most of my listening.

But every now and then I want to plug in my Sony MDR-7506 headphones or connect the phone to speakers that don’t support Bluetooth. If I’ve left my USB C-to-3.5mm adapter at home I’m out of luck. And even if I remember to bring it with me, there’s no way to charge my phone and use the adapter at the same time, since both the power adapter and the headphone adapter plug into the same USB-C port.

Moshi’s adapter solves that issue, and since it’s part of the Made for Google Program, it should be compatible with Pixel phones and most other Android phones with USB-C ports.

But it’s also kind of annoying that there’s a need for this sort of thing at all. It’s a clunky adapter that measures 5.5″ x 1.5″ x 0.4″ and which is a lot less elegant than simply plugging your headphones into a dedicated jack… if your phone has one.

That said, the Moshi adapter has a built-in 24-bit/96 kHz digital to analog converter, which means it should be capable of delivering high-quality audio. And since it’s unlikely that phone makers are going to cede defeat in the war-on-headphone-jacks anytime soon, this type of dongle might be the ugly, awkward future.

The Moshi USB-C Digital Audio Adapter with Charging is available from the Google Store or from the Moshi web store for $40.

I’m not pulling out my wallet to buy one just yet. But it would be kind of nice to have one next time I take a car rental on a short trip — right now I have to choose between using a wired connection to a car’s stereo system and not charging my phone, or plugging in my phone to charge and using a Bluetooth connection… which requires pairing my phone with a car I may only be using for a few hours.