It’s also a pretty versatile mini PC with a 10-watt Intel Jasper Lake quad-core processor, support for up to 16GB of RAM, a solid state drive, and plenty of ports including two Gigabit Ethernet ports and three HDMI 2.0 ports. The Morefine M8S is available from AliExpress with prices starting under $200. 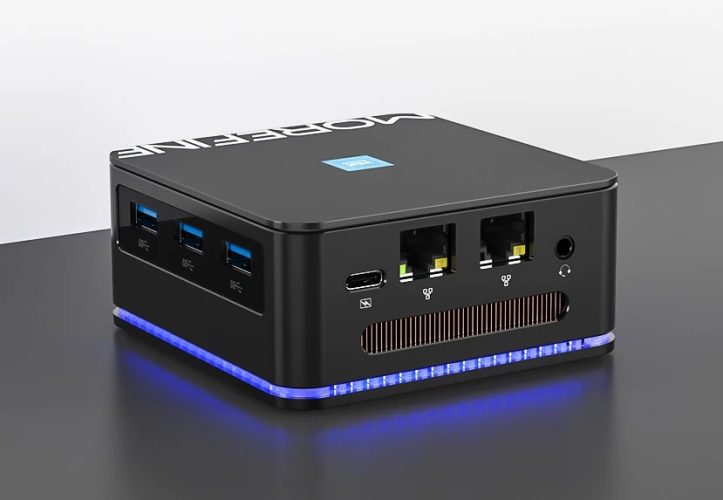 At that price what you get is a barebones model with an Intel Celeron N5105 processor and 8GB of LPDDR4-2933 memory, but no storage or operating system if you’d prefer to bring your own M.2 2242 SATA SSD.

Prices start at $211 if you want a model with an SSD that comes with Windows pre-installed. And a top-of-the-line model with 16GB of RAM and a 1TB SSD is just $299.

In addition to support for up to three 4K displays and multiple Ethernet connections, the little computer has an Intel AX201 wireless card with support for WiFi 6 and Bluetooth 5.2, three USB 3.0 Type-A ports, a 3.5mm audio jack, and a USB Type-C port (for power only). 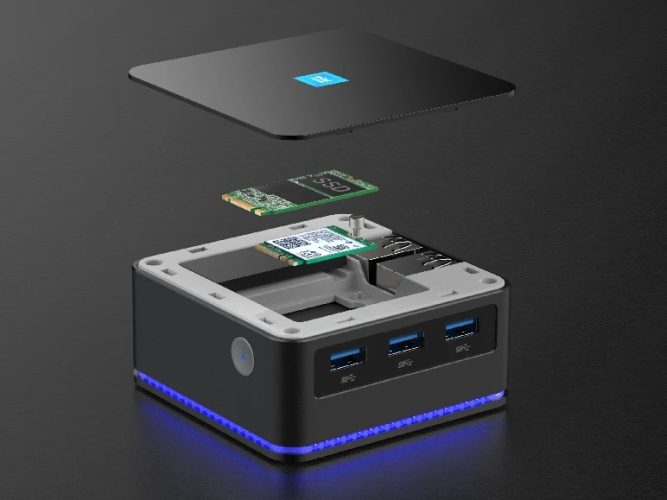 The system has a copper heat sink and a fan for active cooling and an LED light strip around the bottom of the computer. The lid is removable, providing easy access to the SSD and wireless card, allowing you to upgrade those components. But RAM is not user upgradeable.

When I first saw the Morefine M8S in an article from AndroidPC.es, I though it looked familiar… and sure enough the little computer appears to be virtually identical to the ACTAMID M8S that hit Kickstarter last month. At the time I was skeptical since ACTAMID appears to have no real presence outside of that Kickstarter campaign. But now it appears that the company’s mini PC might just be a rebranded Morefine M8S (or perhaps they’re both sourcing the device or its design from a different company altogether).