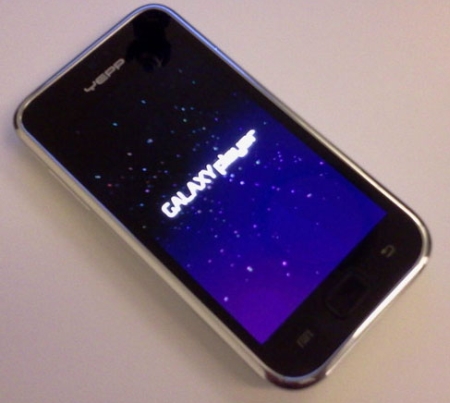 The Samsung YP-MB2 may not be the only phone-sized portable media player running Google Android on the horizon anymore. But this iPod touch competitor will always have a special place in our hearts… because it just looks so darn much like an iPod touch.

The YP-MB2  also happens to have some pretty awesome specs including a 1GHz processor and 4 inch Super AMOLED display. Unlike the iPod touch, it also supports Bluetooth and has a camera. Oh yeah, and it runs Google Android 2.1.

Samsung still hasn’t officially announced the YP-MB2 yet, but we’ve seen plenty of evidence that it’s coming to market soon. First, we started to get reports of the device from Korean news sources. Then we got to check out the first YouTube video, showing a blurry Samsung YP-MB2 in action.

Now Samsung Hub has managed to track down the first real-world photos of the portable media player. It looks pretty slick, with directional pad of some sort at the bottom as well as back and menu keys. There’s a bit of chrome around the edges, and really, the whole thing just looks an awful lot like an iPod touch — until you turn it over and see the camera and white cover on the back.

You can find a few more images at Samsung Hub.