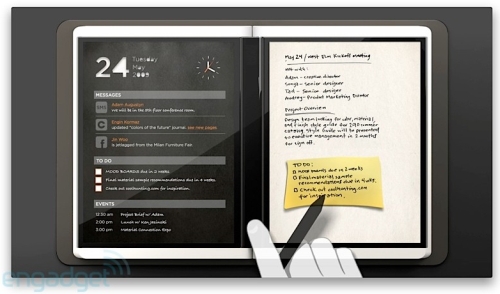 The folks at Engadget have snagged a series of new photos and some new details about Microsoft’s upcoming Courier tablet. It sounds like Microsoft is prepared to take on Apple’s iPad using pretty much the same strategy it’s bringing to bear against the iPhone: The Zune HD and Windows Mobile 7 Series operating system.

The Courier will reportedly weigh just over a pound and measure less than an inch thick. it features two screens, and when you close it up, it’s a little bigger than  5 x 7 photograph.

Under the hood, Engadget says the tablet will have an NVIDIA Tegra 2 chipset, which is a low power chip capable of HD and 3D graphics. The OS will be based on the latest version of Windows CE. But the UI should look more like the Zune HD interface than the Windows Mobile 6.5 user experience.

The Courier is designed to be a “digital journal,” and relies pretty heavily on stylus input and handwriting recognition. Engadget says it should be out later this year.