The GPD Win Max is a tiny laptop designed for gaming as well as general purpose computing. It’s powered by a 10th-gen Intel Core i5 Ice Lake processor with Iris Plus. Expected to ship later this year (after an upcoming crowdfunding campaign), the little laptop has an 8 inch display and built-in game controllers placed above a QWERTY keyboard.

GPD has been providing details over the past few weeks — and now the company is ready to talk performance. While it’s worth taking benchmarks provided by a manufacturer with a grain of salt, at least now we have some.

We also have a few new pictures labeling many of the key components of the GPD Win Max. 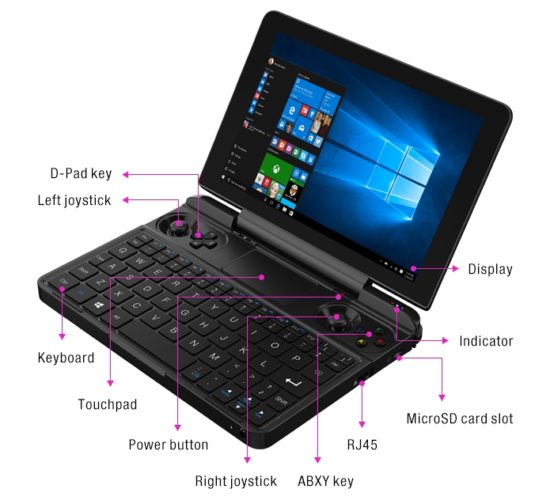 Above the keyboard, there’s a touchpad as well as left and right joysticks, a D-Pad, and A, B, X, and Y keys. There are two shoulder buttons on each side of the back of the computer. And GPD has also included a reset button that you can press with a pin if the computer locks up.

A headset jack and microphone are on the front of the case, and there’s a mouse/gamepad switch on the left side that lets you use the analog sticks to move a mouse cursor when you’re not using them for games.

As for performance, GPD says it’s seeing up to 60(ish) frames per second for recent titles including Red Dead Redemption 2, Borderlands 3, and Call of Duty: Modern Warfare, although you may see fewer FPS for some titles. Devil May Cry 5 is said to run at 18-35 frames per second.

Some slightly older titles like BioShock Infinite, Rocket League, and Overwatch are said to run at up to 100 frames per second.

And if you’d rather see some real-life game play than a bunch of charts, the company did tweet a (very) short video of The Witcher 3 a few days ago:

So, all you guys saw this leaked video? pic.twitter.com/RISnTGFe4K

GPD plans to launch a crowdfunding campaign for the Win Max mini gaming laptop in the coming months and it’s expected to ship later this year.

While there’s always some risk involved with crowdfunding, GPD has a history of using campaigns like these to generate buzz and take pre-orders at discounted prices. The company has yet to fail to deliver a product that was first offered via crowdfunding.

That said, there are usually some other risks associated with purchasing products from GPD, One Netbook, and other Chinese mini-laptop makers. These devices typically don’t come with the same level of quality control and customer support that you’d find from bigger PC makers (pun most definitely intended).