There was a time when octa-core chips were only available in relatively expensive smartphones and tablets. Then along came MediaTek with its affordable MT6592 8-core ARM Cortex-A7 chip.

MediaTek’s processor may not be as powerful as some octa-core chips, but it’s cheap enough that at least one company plans to use the chip in a smartphone that will sell for just $160, making it one of the cheapest octa-core devices to date. 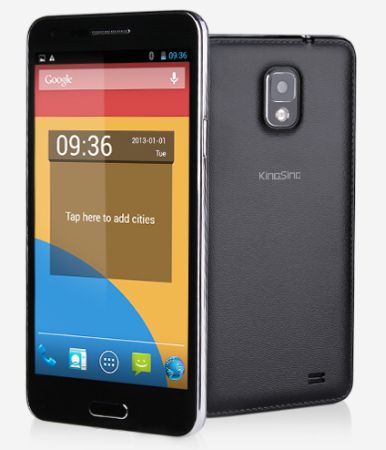 The KingSing T1 has a spec sheet that redefines the budget smartphone space thanks to its 5 inch, 960 x 540 pixel IPS display, MT6592 processor, 8MP rear camera, and 2MP front-facing camera.

The phone also takes some of its design cues from Samsung, including a rear panel with fake stitiched leather and a nice big home button below the screen. The rear cover is also removable, allowing you to swap out the 2800mAh battery for a replacement.

With a QHD display and 1GB of RAM, the KingSing T1 isn’t exactly in the same class as the Samsung Galaxy line of phones it mimics. But that $160 price tag will snag you a carrier unlocked phone with surprisingly decent specs.