Intel’s “Bay Trail” chips are low-cost, low-power processors designed for tablets, notebooks, and desktops. Since the first Bay Trail chips launched in late 2013 they’ve shown up in a number of inexpensive Windows tablets and notebooks such as the Dell Venue 8 Pro tablet and Gateway LT41P notebook.

But Intel is also taking aim at Android tablets, and according to a leaked product roadmap obtained by VR Zone, the first Bay Trail chips designed specifically for Android devices will launch at Mobile World Congress later in February.

We’ll probably also see some of the first Android tablets with Bay Trail chips around the same time. 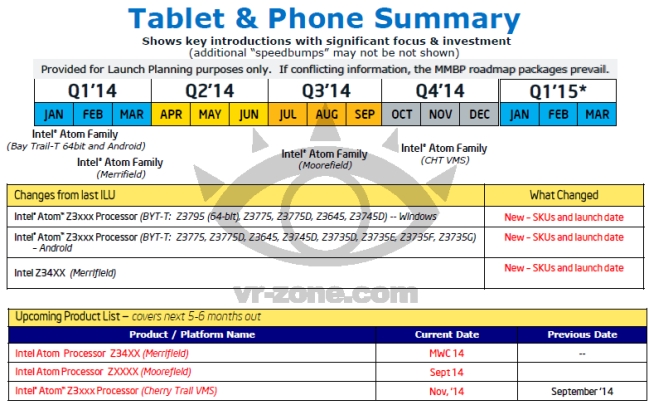 It’s not like you can’t already find some Android tablets with Atom, Celeron, or Pentium processors based on Bay Trail architecture. But they’re pretty few and far between at the moment — and they tend to be devices like the Fuhu DreamTab, which uses chips that were originally designed for Windows machines or tablets like the ViewSonic ViewPad 10i which runs both Windows and Android.

The company will reveal its next-gen low-power chips, code-named Cherry Trail around November. Those will be the chips that eventually replace Bay Trail.

You can read more about Intel’s plans for phone, tablet, and desktop processors in the coming year at VR-Zone